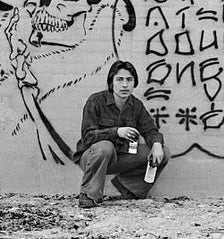 Charles "Chaz" Bojórquez, born in 1949, was one of the first graffiti artists in Los Angeles. The Mexican-American artist grew up in L.A. in the 1950s and 1960s, where he was introduced to the old tradition of cholo writing, which was the preserve of Latino gangs on the east side of the city. In 1979, he began a long journey that would take him to more than 35 countries where it will deepen the techniques of graphic and calligraphy. His raw and imposing style, and all the territoriality it gave off, prompted Bojórquez to start tagging. His work can be found in important public collections such as the National Museum of American Art in Washington, D.C., the Orange County Museum of Art, the Smithsonian Institute, the National Museum of American Art, LACMA, MOCA, the National Hispanic Cultural Center and the Laguna Art Museum. His work has been featured in numerous exhibitions such as at the L.A Louver Galleries in the exhibition Roll Call: 11 Artists from L.A. in 2017 or at the National Hispanic cultural center art museum in Albuquerque for the presentation of their new artist selection in their permanent collection.