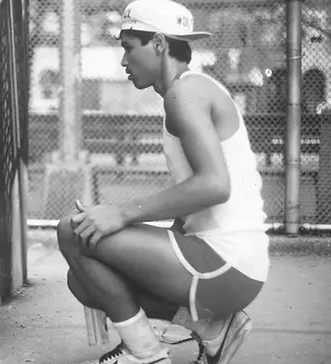 William Cordero aka Bill Blast is an American artist and one of the most prominent New York graffiti artists of the 1980s. Originally from New York City, Cordero was born in 1964 and grew up in Harlem. In the early 1980s, he was part of a group of writers who made the jump to the gallery scene. Bill painted mainly on the walls of basketball courts and has, in fact, very few trains to his credit. In 1982, in what became commonly known as "Rock Steady Park", Bill painted two masterpieces on opposite sides of a handball court. The first was titled Sky's the Limit, referring to the lyrics of Keep On by the band D- Train. The painting consisted of several prominent New York City landmarks and created an urban backdrop for the inspirational message inherent in the lyrics. The second mural was titled Eye of the Tiger. Today, the murals are long gone. Bill attended the High School of Art and Design and after working as a consultant on the film Beat Street (1984; directed by Stan Latham), he attended Parsons School of Design where he pursued a major in painting. As his talent and skills as a professional muralist developed, Bill was commissioned to produce large-scale murals for WCVB-TV, the ABC network affiliate in Boston, the Port Authority of New York and New Jersey and Art Train, a traveling museum currently located in Detroit. Bill Blast began exhibiting at the age of nineteen internationally at venues such as Yaki Kornbilt Gallery in Amsterdam, The Netherlands, Boymans Museum in Rotterdam, The Netherlands, Gallozzi La Placa and Fun Gallery in New York City and Boston University in Boston, MA. Most recently as part of the exhibition "Art vs. Transit", organized by Henry Chalfant for the Bronx Museum of the Arts. His work can be found in public collections such as the Museum of Modern Art in New York, as well as private collections such as the Alain-Dominique Gallizia Collection, the Yaki Kornblit Collection and the Speerstra Collection, among others.

- Groninger Museum, Coming From The Subway,